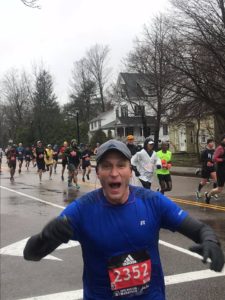 Below is my story of how I find myself training for my 2nd Boston Marathon.

I didn’t grow up running and I didn’t run in high school or college. Running, for me, started as something to get in better shape during my senior year in college and progressed from there. I was inspired by my wife when I watched her run a half marathon in the fall of 2010 (ironically, she absolutely hates running). I was taken aback by the very tangible sense of support and community at that race. It also flipped something in me competitively. I typically don’t race to just “have fun”, but rather to try and beat every single runner I can.

My history of races (and results) are set forth below. I don’t post these to boast…rather so you can see the progress that can be made by focused training. I would not consider myself an “above-average” athlete. Anything that I’ve done that can be perceived as “impressive” (relative term) is attributed to training, experience and a stubborn will to accomplish a goal.

As you can see, I started off slower. When I finished my first half marathon in 2011…I couldn’t imagine running an additional 13.1. That didn’t seem possible…I stopped three different times during that 2011 run and was passed by someone with a limp. The entire race was one of the more humbling experiences of my life (as have many subsequent races…races always humble me).

On April 15, 2013, I watched in shock at the scenes coming from the Boston Marathon…the absolute chaos from those two bombings. I have a brother who was active duty in the Army at that time (currently in the reserves) so my mind immediately went to him. Very few things in this life rival my love for my brother so I became very pissed off because who knows how this would affect his future. Within 30 minutes, I signed up for my first marathon (Kansas City, 2013) [2]. I emailed my wife explaining how angry I was and how me running this insane distance was my way of giving the finger to those terrorists. I didn’t think I would ever have a snowball’s chance in hell in qualifying for Boston. I couldn’t run 5 miles at my qualifying time, 3:05 (7:03 pace), let alone 26.2.

On October 22, 2014, my wife gave birth to twin boys. I went for a run to relieve some stress (boys were in the NICU) while she was sleeping and found running 10 miles was relatively easy so I decided right then and there that I would try and qualify for Boston. After failing 3 times, I finally qualified (and was accepted) to the 2018 Boston Marathon.
Current State: I am in week 11 of Boston Marathon training [3] as I prepare to run it for a 2nd time. Every time I train, something different hurts…this time, it’s my upper left hamstring with the additional hill training. My goal is to break 2:50 (6:29/mile). I know it’s possible but there are always varying factors that contribute to the outcome of a race and some of them are not in your control.

My Family: I have a wife of almost 9 years, and we have three boys, (twin 4-year-old and one is about to turn 3). As you can imagine, me training for a marathon puts a lot of stress on my wife. Not only training…but the three-year qualifying effort of traveling to different places to try and make it happen. I have very loving parents too that always come over at a moment’s notice. A group of 14 traveled to Boston with me during my first race there. I wouldn’t have been able to do what I have without them.

This whole sharing process through social media (or sharing in general) is new and uncomfortable for me.  I don’t particularly like talking about myself.  That said, running is a very large part of my life and it affects my family.  Sharing the good, bad and terrible of running can be relatable and unifying.  It must be said from the outset: None of this would be possible without God and the support of my family.  I have been blessed with physical health and an incredible support system.